We decided to have book another private tour today with the same crew, but this time were booking directly with them so its like maybe 500 PHP cheaper. Like yesterday, the cost of the tour is inclusive of entrance fees which is usually 100-200 PHP per person. We had the same very early breakfast at 6am. But yea its actually nice to start early because we get to finish early enough as well to have a relaxing time at our resort. OK, lets do this!

We were the first one to arrive here and I was like wow!!!

Located on the northern end of Coron island is another popular lake called Barracuda Lake. From what Ive read about it, its called that because of the massive barracuda skeleton found within its waters. 😱

Ok, I dont know how large but it was pretty quiet and did not encounter any, luckily hehe.. The water was very deep though and a strictly lifejacket swimming area but of course we got away with it because we were there first. 😅

Another popular spot here in Coron island is the Twin Lagoon. We brought a kayak along and paddled our way to the lagoon and it was a bit of an adventure since there was no actual place to park it but we managed anyway. But then a piece of advice, do not bring it to get to the lagoon tho hehe..

When we arrived there, a few people were already in there but luckily we didnt have to wait too long to get the chance to have it to ourselves since big tour groups dont hang around too long. We also came there at lunch time so most people were having lunch.

Awesome photo right! Thanks to the the sweet couple who took this photo like a pro! After swimming, enjoying the lagoon to ourselves and kayaking back to our boat, we moved on to have our yummy lunch as well. 😊 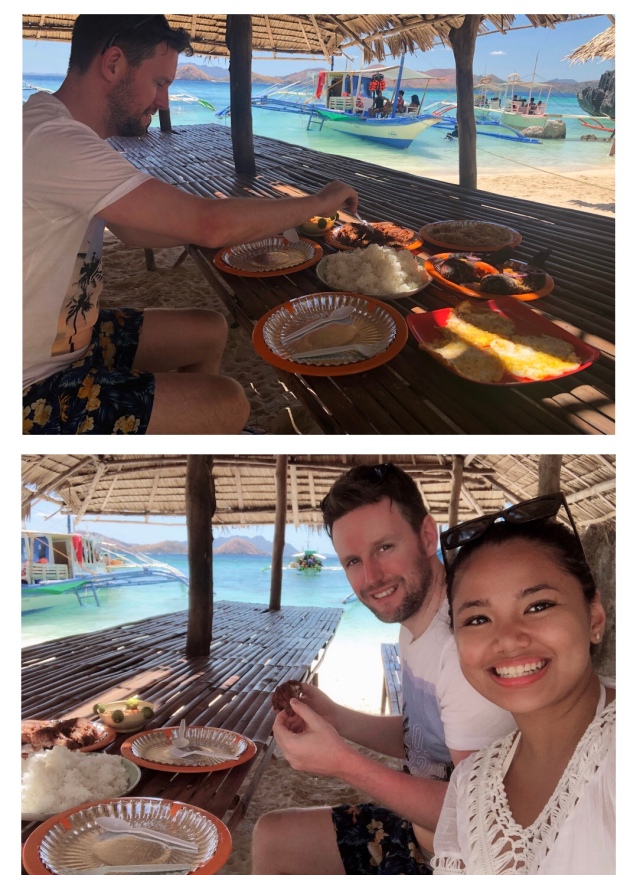 The Skeleton Wreck is one of the I think 7 wreckages over there, and this one is a 25 meter long supply ship that was hit by an airstrike during the world war II by the US air force.