A little bit of Kuala Lumpur

But anyway, Im quite sad, when I was on the layover, went to the crew lounge so I could check mails and stuff, then tried viewing my xanga, they ddnt have Mozilla so I opened it on Internet Explorer, I HATE IT! Its distorted! I hate IE! So yea just letting you guys know, my site is best viewed on Firefox, otherwise, it looks like crap..

Well, good evening in Doha.. I got back this afternoon from KL. It wasnt a full “full” flight but I am so tired that I coudnt feel my feet anymore. I  operated the galley today.. I enjoyed it,  thanks to my wonderful senior who helped me out with every single detail, theres so much more to learn and I am so up for it! 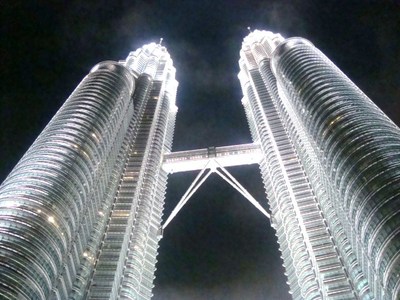 Moving on, KL.. going there it was a night flight so when we got there I ddnt have much energy left but I tried ok! lol Went out with one fellow crew because I really wanted to see the Petronas Towers. I was watching National Geographic channel when I was in Nairobi, and they featured the towers on Mega Builders.. I dont know, but I am always fascinated by these sky scrapers, just like how I was wowed by Burj Khalif (Dubai), Auckland Tower and CN Tower (Toronto).. I hate heights but these things are amazing (galing ng gumawa, magaling sa math, lol), and thank God I got to see them! In addition to that, there was this Filipino movie called “Miss You Like Crazy” starring John Lloyd Cruz and Bea Alonzo which was shot in KL so, umm well, its just always been my game I guess, those places na npapanood ko in movies gusto kong puntahan.. lol Anyway, when I saw the Petronas Towers, I fell in love, it was evening so for me mas maganda.. It was so bright! and let me share some lines from the movie..

….. at dahil jan I will share the trailer too! (Just because I can, who cares if its corny! I love corny! hehehe) 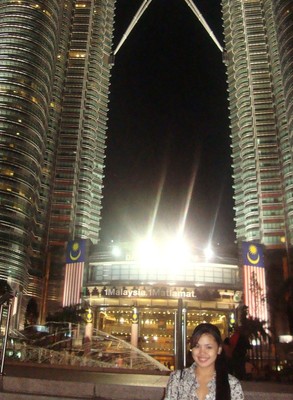 ..went food tripping after (at KLCC)! It felt like home!!!

Well, thats it for now, I need to take a bath na for another flight later at 4am (LHR) . Minimum rest lang so, lets just do this! Might meet up with some not so old friends from Emirates in London btw!!! xx