Emirates finally gets second A380 after delivery delay 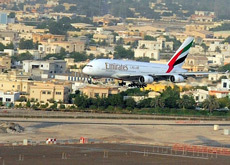 Emirates Airline on Friday finally received delivery of its
second Airbus A380 superjumbo from manufacturer Airbus, after a delay
of several weeks.

The second superjumbo, which brings
Emirates’ all wide-bodied aircraft fleet to 122 inclusive of
freighters, had been due to arrive in August but manufacturing problems
related to the fitting of cabins is understood to have caused the
delays.The double-decked aircraft arrived in Dubai at 3.30pm
local time, and will undergo standard checks and maintenance before
entering commercial service on Oct. 27.Designed to transport passengers on long-range journeys in unmatched
comfort, Emirates’ second A380 will join its sibling, the airline’s
first A380 delivered in July, on the Dubai-New York JFK non-stop
service.

This increases Emirates’ A380 service on the route to
once-a-day from Sunday. Emirates operates two flights a day to New York
JFK, the second daily service using a Boeing 777-300ER.

Sheikh
Ahmed bin Saeed Al-Maktoum, chairman and chief executive, Emirates
Airline and Group said: “Emirates has an environmental goal to operate
the world’s most eco-efficient fleet and our second A380’s arrival will
further reduce the airline’s average fuel use per passenger.

“By
2013, the arrival of at least 100 new aircraft and the retirement of
some older aircraft will see a further improvement in Emirates’ overall
fleet efficiency.”

The carrier is due to receive an average of
one new A380 or Boeing 777 a month, as part of its order of more than
170 new aircraft from Boeing and Airbus.

Emirates has another 56 A380 aircraft on firm order, of which two more will be delivered before the end of 2008.