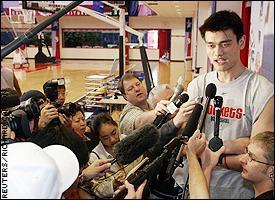 Im not an NBA fan at all, but yea last nite after watching my Korean drama, sakto theres a new movie on HBO, so yea I waited for it to start, wen it started, it says NBA produstions and blah blah.. Im like “ano to? basketball sa HBO?” then finally it was the story of YAO MING pla.. the Chinese basketball player who made it on NBA. I got interested, I mean how did he get that far and how he started. It was so inspiring, I mean we all know that theres a racial issue in the states, and the tribute showcased kng gano kahirap un adjustments na ginawa ni Yao Ming. So yea im  a PROUD ASIAN! Galling nya.. I promise! GO ROCKETS! haha….

*With Eka rite now at the slab.. shes fixin her xanga so yea u might wna check that out I linked her already as ECKA on my VIP list. 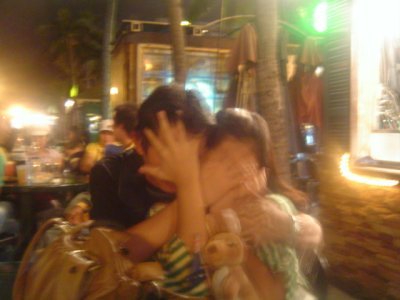 * Btw, i recieved a phone call from Christian today just a few mins ago top say goodbye cuz he’s going back to Aussie already. So yea il see him wen he gets back in a few months. Im gna miss him though. Iono if his efforts are enuf to prove me that he’s serious, but yea wen he say that he’s coming back. HE MEAN IT. and yea i hope he stays that way forever. He made me feel special. Thanks Christian, il see you again.